As I Mourn Every Memorial Day Weekend

it’s midnight and in all honesty I should not be writing right now. I am currently in the middle of my pre-Ramadan clean up/house organization. As I write this my whole bathroom is taken apart. I took down the shower curtain to wash it and I throughly cleaned the vanity. For some reason I decided to take a seat and suddenly I was writing, so here you go… 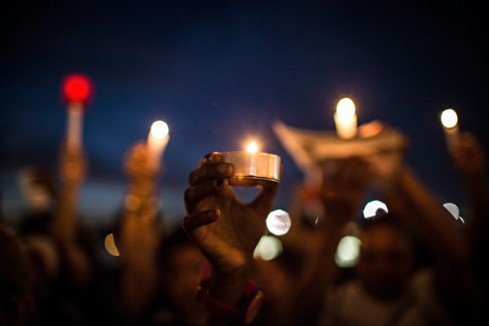 exactly four years ago today I was hustling around my house in preparation for a bazaar that I used to host annually. I was so excited for the next day. I had all of my signage and decorations prepared and door prizes carefully packaged by my door. The hatch of my SUV was packed with food containers, pop and everything that I would need to be as organized as possible. I went to bed (reluctantly) at 2am excited with anticipation and giddiness of all of the fun that I was going to engage in just a few hours.

at 3am the telephone rang and honestly all I can remember are flashes. Shock and vertigo set in and what happened next flipped me completely. It was my husbands family in Tunis. They told us to watch the news. They somehow managed to tell us the horrible news that his cousin Chahnaz (Allah yarhamu) was killed. Not only killed, but actually murdered. She was shot 4 times in the face and twice in the chest by her husband in front of their children’s elementary school in North Carolina. It was something straight out of Investigation Discovery.

Suddenly the bazaar was over. I had to pass everything off onto others and make different plans. I am a student in the faculty of social work but no amount of theory can prepare a person for that kind of carnage. We were the only family in North America and my husbands passport was expired so I flew to Chapel Hill by myself and was given the task of packing up her whole life. For 2 days I just sat in her home in shock. It still smelled of her. I could smell her perfume and everything seemed so surreal. I didn’t want to go through any of her belongings because I felt as though it was an intrusion of privacy and that she would come in at any moment and catch me.

My brother in law called me on the third day to see how everything was going but nothing was done. He reassured me that it was okay to go through everything and that even though I felt uncomfortable I had to move past that because her family needed her papers for legal purposes. I had to go through all of her personal papers. All of her diaries. Her clothes. Her make-up. She was so organized and together (mashAllah). That experience was so disturbing on so many levels. Not only for the obvious but also because there I was being trusted with secrets and treasures of her life. I had never even met her. Our paths had never crossed. When she was in Tunis I was in Canada and when I was in Tunis she was in the US. Regardless, she touched me. She was an amazing woman. She was strong and intelligent both personally and professionally. She was a Research Associate at UNC-Chapel Hill in the pharmacology department working on infectious diseases.

Chahnaz (Allah yarhamu) did everything right. She was educated, she was beautiful and from what I have learned she was a good person. Kind, organized. She was realistic and focused. She loved her beautiful children deeply and did everything in her power to give them a good life. She is honestly the kind of person I would want in my life as my friend. I will never be able to let her memory die, she is a constant reminder in my life. She reminds me to try hard and to stay true to myself even when others can’t understand where I am coming from. I won’t articulate everything but over the years she has given me so much to reflect on and I have learned so much from her. Not only from the tragedy but from her life in general.

Chahnaz (Allah yarhamu) was a victim of domestic violence. She was abused on many occasions, and in various ways. She was strong enough to get herself out of a toxic relationship and to move forward no matter how difficult. She was one week away from having her divorce finalized. She was one week away from freedom when her life was taken. This situation has proven to me that domestic violence can happen to anyone and is not located to a specific socioeconomic class, race or nationality. She was an educated woman. She married an educated man. They were financially stable. She was beautiful. She had an amazing career that inspired. She was a beloved mother, daughter, sister, aunty and friend. And yet had experiences that not many will ever know.

About 5 days after I arrived in Chapel hill my husband arrived and we got interim custody of my niece and nephew. We packed up her belongings and tried to do all we could to keep the children from feeling what had happened. On the last day I was reading “Are You My Mother?” to them. When we finished the book Rayan said to me, “you’re our new mother.” It killed me to hold it together but I did and gently explained that they have one mother that loves them so much and that no one will ever be able to fill her very big shoes.I love those kids so much. They are so beautiful and intelligent and amazing.

The next day they flew to Tunis and I came back home. I have never been quite the same.

I can tell her story without crying now, but this is an event that has shaped me in so many ways. This blog has been my way of dealing with the stress and trauma that I experienced in this situation. I have written about many topics but the roots of this page is here in this story. Many people don’t understand why I am doing this, and for some it is considered taboo to talk about the topics that I do, but I can’t help it. I am a person that needs to express it. Over the years, my writing has caused me some discomfort in the loss of friendships and people don’t understand why I am so angry. This is one small piece of my story and it has to come out because if not in this way, it would come out in an other more negative expression. I don’t expect anyone to understand and they don’t have to because it’s not about them. Maybe one day I will be able to let go and “just be normal”  but I am not normal and this part of my story is a small piece of what makes me stronger and more empathetic person. To anyone I have hurt that happens to read this, I am not a malicious person and I am not the kind of person that seeks out drama. I am striving for a peaceful existence in a difficult world. If I have hurt you in any way please know that it was not my intention and that I don’t have any negative or bad thoughts about anyone.

Ramadan is coming, I embrace love and forgiveness and wish nothing but the best for everyone.

This entry was posted on Saturday, May 28th, 2016 at 12:51 AM and tagged with chahnaz kebaier, Chapel Hill, love, Mary Scroggs Elementary School, memorial day weekend, North Carolina, Southern Village, theskinnyjeanrant, theskinnyjeanrant.com, www.facebook.com/theskinnyjeanrant.com and posted in Uncategorized. You can follow any responses to this entry through the RSS 2.0 feed.
« Islamic Book Study
Power Dynamics of Oppression: A Reflection »

3 responses to “As I Mourn Every Memorial Day Weekend”