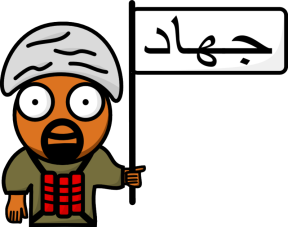 Activism and in this case, radicalism, doesn’t happen in a vacuum. It is a response to something bigger. In the case of the Charlie Hebdo cartoons I would say that there is a level of hypocrisy that these guys were trying to counter. On one hand freedom of speech is being tooted and Muslims are made to grit their teeth and bear it whilst Muslim women in France are not afforded the same right of expression. Muslim women aren’t allowed to outwardly express their faith through their clothing because it is seen as something offensive but challenge the cartoons and you are taking away peoples fundamental rights? This makes no sense.

What I want to know is why that approach? Why? This is not the first time that Charlie Hebdo has been under fire for overtly racist cartoons. In 2009, artist Sine was fired for creating anti-Semitic cartoons after having been taken to court. In late November 2014, Ezra Lavant was fined $80,000 for liable because he was defaming a Muslim lawyer on his blog in Canada. Obviously there is a precedence here. We don’t need to go crazy and shoot up the world. If something needs to change we need to use our intellects and bring about justice in a peaceful way that is just for all. This is the way of the Prophet صلى الله عليه و سلم .

If they had taken two seconds out of their day to read about the Seerah of the prophet صلى الله عليه و سلم they would know that what they’ve done is complete madness and against the Sunnan and tradition of Islam. If I could stress one thing to Muslims and non-Muslims it would be this: READ!!!! And then reflect. Why did the sahaba and people like al Bukhari even waste their time trying to preserve the seerah and hadith if we are just going to pick and choose and take matters into our own uneducated hands? What a waste of time! Read the Seerah of the Prophet and tell me what he would do? Read about the time that he was praying at the Kabah and his enemies put bloody entrails on him while he was in sujood and he ignored them and continued with his prayer. How about the story of his next door neighbor who converted because she was so shocked that he understood she was sick because she stopped putting her garbage on his front step. What about getting stoned in Taif? What about when he took back Meccah? WHAT ABOUT THAT?

Who is your Prophet? Do you even know him صلى الله عليه و سلم? If you are acting like this then I can guarantee that you don’t. You are making life more difficult for everyone. Step aside and practice patience. Do you even know what that means? Do you think it is a passive state? It isn’t that’s why it is hard because it is action. It takes effort and energy to be patient.

These actions are not helpful in any way, shape or form, they are actually counter-productive. Rather than outing Charlie Hebdo and all other racist blogs, cartoonists and the like for what they are the actions of people like this are making us, the everyday Muslim out to be crazy people. So rather than focussing on that we create an unnecessary gongshow out of cartoons that no one cared about until yesterday and who will now have a vast number of supporters today.

To say that I am angry right now is a complete understatement and so here I am ranting my heart out hoping to get through to the people that think this type of behaviour is ok. It is not. Our society is a crazy thing and although this is an event that happened in France, while I am in Canada, one common denominator persists: we are shaped by our society but we are society therefore we also shape it. If these people would have only taken a step back and reflected on what they were about to do they would have realized the injusticeS they have caused. Not only the cold blooded murder of artists, deli customers and police officers including a Muslim police officer, Ahmed Merabet, but also the negative backlash that Muslims, especially visible Muslims, especially Muslim women who wear hijab, will have to deal with. I am personally afraid that we are quickly slipping back into jahiliah (ignorance). People are acting out of irrational thought. I see the injustices in the world and I too want to do something. I am only one person. You are only one person. But together we are two people. Can we not make a bigger impact together? What if we all got together and fought against injustice in a peaceful intelligent way? What would happen then?

Furthermore, not only has this issue hurt our Ummah from an outward appearance standpoint but it has also taken away from a greater injustice that is happening right now. I am talking about Syria. Who even cares right now, because all of our attention is on Paris. At this very moment it is -1 in Syria, which to me as a Canadian sounds like a fresh spring day. But as a person who has lived in Tunisia in the winter I can tell you it is cold and I would go as far to say that it is much colder there at +5 than it is here are -20. They live in canvas tents and are not at all equipped for the cold. They have no jackets, no mittens and no long johns to keep them toasty warm. So while I am here completely frustrated with the France fiasco I am warm. I have my Tim Horton’s medium black beside me and my tummy is full. Let us please bring the focus off these complete idiots and all come together and do justice to the people of Syria.

I’m just going to throw this out there. I’m not a Shiekh, I’m not an 3lem, I’m not anyone. But I would wager that not only are these morons now going to be held accountable for the deaths of the 15 plus people who were shot by their guns but they will also be held accountable for any further attack or discomfort on the ummah due to their actions. Not only that, but if you really really really try hard to reflect on all of this I would even go so far as to speculate that they will be held accountable (to some degree) for the loss of life in Syria due to the attention that has been taken away from their cause onto this ridiculousness.

To the parents of children out there: please raise your children to be critical thinkers and how to connect the dots logically. If not I fear the world that we are leaving for our children.